Equal column width in section of a table

Equal column width in section of a table

I want a set of columns (A) with a fixed width, and a set of columns (B) that are all of equal length. When I hide columns from (B), I want the rest of the columns in (B) to resize themselves equally while taking up the missing space, and vice-versa. Essentially, I want to be able to keep one part (A) fixed, and another part (B) dynamic. 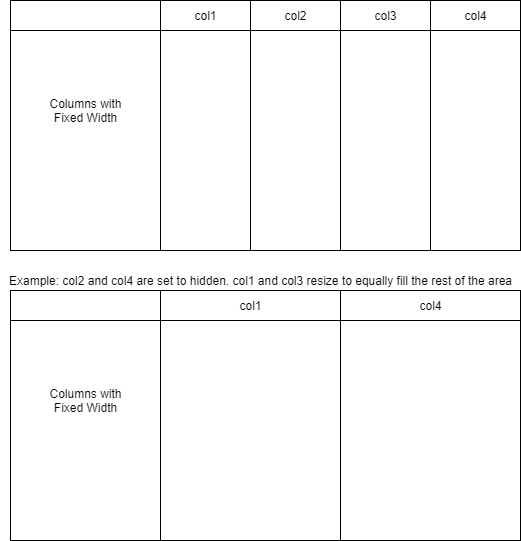 NOTE: This is NOT what I'm referring to when I say "columns of fixed width": https://datatables.net/extensions/fixedcolumns/examples/initialisation/simple.html

I think the most difficult part of this is managing the equal part. If I didn't need to set columns visible/hidden, the solution would just be as easy as defining "%" widths inside of "columnDefs". Obviously, you can see why this doesn't work when the number of visible columns changes, because the "%" is no longer accurate (i.e. If 4 columns were of 10% width that means they take a total of 40% width. If I made 1 column hidden, there would now only be 3 columns still of 10% width, meaning that they now only take a total of 30% width. My goal is to keep those equal widths while also keeping that total width.)